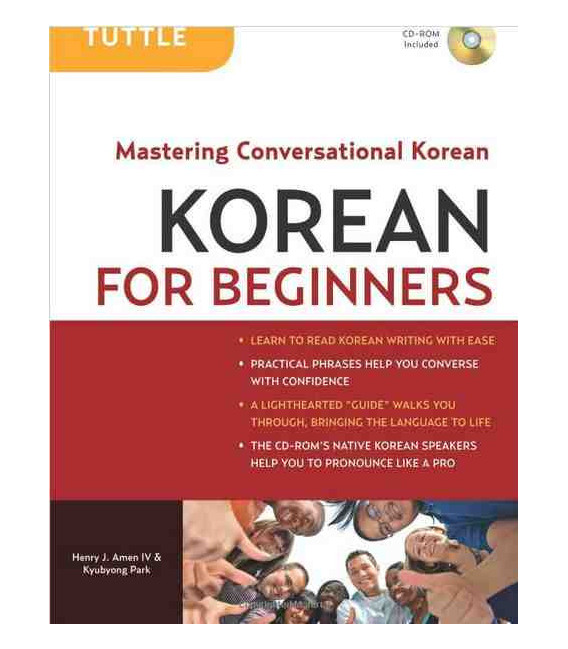 Have you ever considered learning Korean, but been put off by the unusual look of the characters? Don't let yourself be scared away! Korean has been called "the most logical language there is," and with this friendly and thorough introduction you will soon see why.

As the more than 1 million Americans who speak Korean can attest, Korean is here to stay, and generations of young (and older) adults are determined to learn it. This book is for people who want a grasp of how to speak, write and understand Korean—and who want to enjoy things while they're at it!

Using a lighthearted, humorous approach, Korean for Beginners starts by showing you just how reasoned and logical the Korean alphabet, hangeul, actually is, and helps you master it faster than you learned the English alphabet. Realistic situations you might encounter in Korea in Korean-speaking environments are described, and new words are explained in terms of how you'll find them useful to communicate. Numerous illustrations enliven the text, and a CD-ROM bound into the jacket lets you listen and repeat phrases in the book. Soon you'll be able to say with pride, "I know Korean!"

Chapter 1: Welcome to Korean!
An introduction to Korean and the Korean Spirit
Chapter 2: Korean Characters
An Introduction to the Korean Characters and Their Pronunciation
Chapter 3: Reading and Pronouncing Korean Words
Review of the Character and Some Additional Pronunciation Rules
Chapter 4: I you love
Five Basic Features of  Korean: World  Order, Particles, Conjugation, Honorifics, and Omissions and Plurals.
Chapter 5: My Mother is Korean, and My Father is American
All about Particles
Chapter 6: Learn, Learned, Learning
Regular Conjugations Patterns
Chapter 7: Go, Went, Going
Irregular Conjugations Patterns
Chapter 8: My Mother Loves Me
Honorific Endings and Words
Chapter 9: Hello?
What to Say in Greeting, in Parting, and in Thanks
Chapter 10: I, You, We…Do I know you?
Personal Pronouns and How to Address Strangers
Chapter 11: What`s This?
Demonstrative Pronouns and How to Ask Simple Questions
Chapter 12: To Be, or Not To Be?
All about the Verb “To Be”
Chapter 13:  My name is Hal
Introducing Yourself and Holding Simple Conversations
Chapter 14: Father, Mother, Brother, Sister
Korean Nouns and Terms for Family Members
Chapter 15: I Don’t Want to Eat
Advanced Pronunciation Rules
Chapter 16: Excuse Me, Where’s the Restroom?
Interrogatives: When and Where
Chapter 17: How`s Korean?
Interrogatives: How and Why, Reason and Causes?
Chapter 18: I`m from the U.S.
Verbs Tenses: Past, Progressive, and Future
Chapter 19: Have you ever Seen a Korean Movie?
Turning Verbs and Adjectives into Noun Modifiers
Chapter 20: I Couldn’t Study So Much
Negations
Chapter 21: I Should Talk to My Wife First
Suggestions, Suppositions, Obligation, and Prohibition
Chapter 22: Canada is Larger than the U.S.
Special Adverbs
Chapter 23: One, Two, Three
Counting: Numbers and Counting Units
Chapter 24: How Much it This?
How to Shop?
Chapter 25: What time is it?
Asking and Telling Time and How Many
Chapter 26: Today is August 15
Days, Dates, and Seasons
Chapter 27: I Wish You Would Come Back to Korean Someday
Wanting and Wishing
Appendix: Grammar Terms
Korean-English Glossary
English-Korean Glossary

Henry J. Amen, IV, is a freelance editor and writer of language learning materials; he learned Korean by being plunged into the busy streets of Seoul on a business trip.