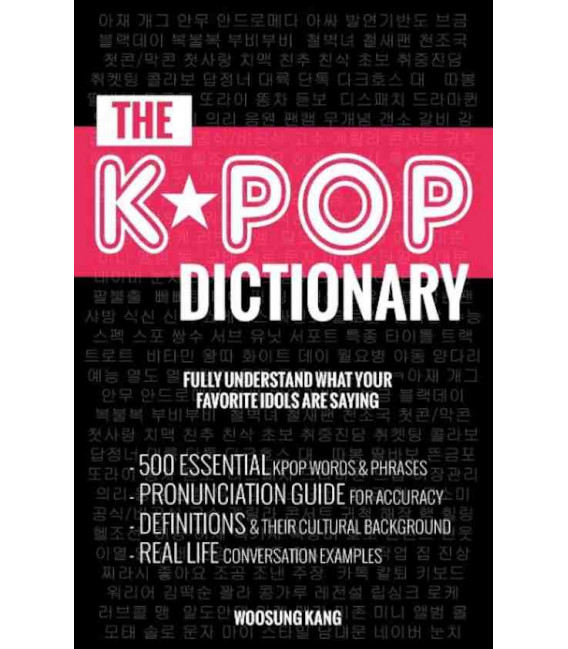 K-POP Dictionary - Fully Understand What Your Favorite Idols Are Saying

K-POP Dictionary is a book targeted to K-POP fans. The book contains the most used expressions from Korean songs and Dramas. In many occasions, these expressions belong to a very informal language register, so this dictionary will help fans to understand the messages of each song.

Each expression or term appears written in Korean and Romanized. After, there is a definition of each term and also an example that contextualizes each expression. It is not necessary to learn Hangeul to use this book because it is mainly targeted to K-POP fans who wish to learn and understand what they listen in each song.

Description by the publisher:

Have you just started following K-Pop and K-Drama but can’t understand the lingo? Do you want to be a part of K-Pop and K-Drama fandom but can’t blend in because you don’t know the jargon everyone is using? Or are you an experienced K-Pop / K-Drama fan wanting to expand your vocabulary? Then this book is for you!

The K-Pop Dictionary is designed to help you learn the most up-to-date vocabulary used in K-Pop, TV shows, and K-Dramas. As the title of this book suggests, this is not an ordinary dictionary:

It is specifically designed to teach you what the words mean in a K-Pop and K-Drama context, because without knowing the cultural background of the words, they are just a bunch of enigmas. So we have included essential information such as where the words originated, plus where, when, and how they are used. Without this, you are missing out on all the news and updates other fans are talking about!

We have also included real life examples of their use. You will gain a thorough understanding of the vocabulary, its nuances, and its origins. You can use this as a quick reference book any time you run into K-Pop and K-Drama lingo, or as a study reference by utilizing the conversation examples included on every page. Whatever your goal, this is a great way to expand your K-Pop and K-Drama knowledge; your window into the fascinating world of Korean culture!

A dictionary of honest human interaction, Korean pop culture, and everyday K-POP life. A resource for language learners confused by real-world Korean, and a tool to help you understand the world of a K-POP fan. But more importantly, great entertainment for everyone.